A guide and description of the sport of rabbit racing.

Rabbit racing is a new and interesting way to enjoy time with your pet rabbit in a competitive and fun environment. The sport first appeared in earnest in Australia around 2010, and has attracted a “trainer” following from among the ranks of both adults and children, men and women.

Rabbits are led while in a harness across a short, usually indoor course, similar to a show arena, and are challenged with a progressive series of jumps, slaloms, tunnels and other obstacles.

Because rabbits are often distracted by the scent of other rabbits, and the course is re-used between competitors, a practice of wiping and spraying down the course with vinegar to both sterilise the course, and neuralise any interesting foreign rabbit odors is often observed.

The race course is similar to a steeple chase type of course for horses, but, of course, being rabbits, much less dangerous and a lot more fun for the rabbits given they are born to jump, weave, and barrel down tunnels.

The race format is similar to hillclimb events in motorsport, where racing rabbits begin from a standing start, and race in the course individually, against the clock in a time trial or time attack.

As can be seen in the movie below, depicting an experimental exhibition race series in the rocks, Sydney, height obstacles have sensitive graded height bars, similar to bales on cricket stumps, and notionally, racers are penalised for failing to clear the obstacle cleanly, knocking off  bales from the jump.

Under some rule formulations, trainers are not allowed to touch their charges, or provide significant torquing direction with the lead.

At present, rabbit racing in australia seems to be an open classed sport, with no breed, size or weight restrictions, where all types and of rabbits can compete and race against one another, so no “scrutineering” of competitors takes place.

That said, it is acknowledged that the lop eared breed has shown particular promise in the sport, due to the right combination of temperament, train-ability, size, and athleticism.

The sport is thought to have it’s roots in Scandanavia in the 1970’s, where the races were called “Kaninhop”, or, in english,”Rabbit Jumping” 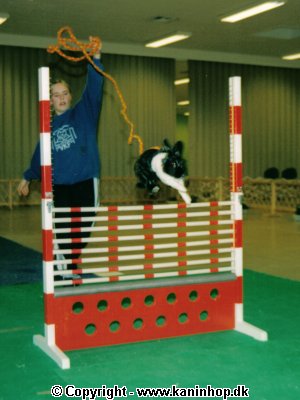 In the Scandinavian type code, rabbit athletes compete in four distinct events, along a raised table course of around 8 metres in length.

Rabbits naturally love to jump, weave and lunge, and so the races are simply a controlled display of natural behaviours. Training is conducted utilising positive reinforcement in the form of treats, and affection.

More information on the sport can be found on the danish site http://kaninhop.dk/

The Australian Rabbit hopping society webpage lists Australian record holders, and full race form records of all registered racing rabbit hopping bunnies in Australia, as well as lists of up and coming events for 2016 and beyond.

More rabbit jumping action in Adelaide can be viewed on Dr Harrry Cooper’s segment on Better homes and gardens in 2013.