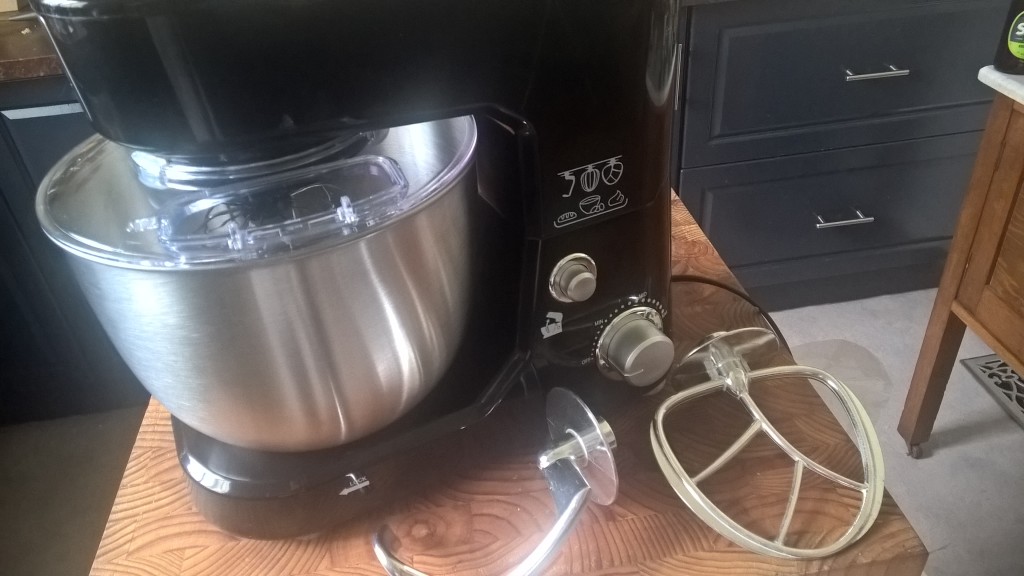 The instruction manual was even useful because it was written in understandable English for once!


The mixer also goes by the name of the Lenoxx 100oW MMX150
It was a present for the lass, who dearly wanted to make up a very special cake.

When picking up the box from big W using the very convenient click & collect service, we were a little concerned that the box the mixer came in was made of old cardboard and duct tape… but inside, the normal retail box was revealed, with the packaging still sealed, suggestive that we had received a brand new item for our money, as had been promised.(phew!) 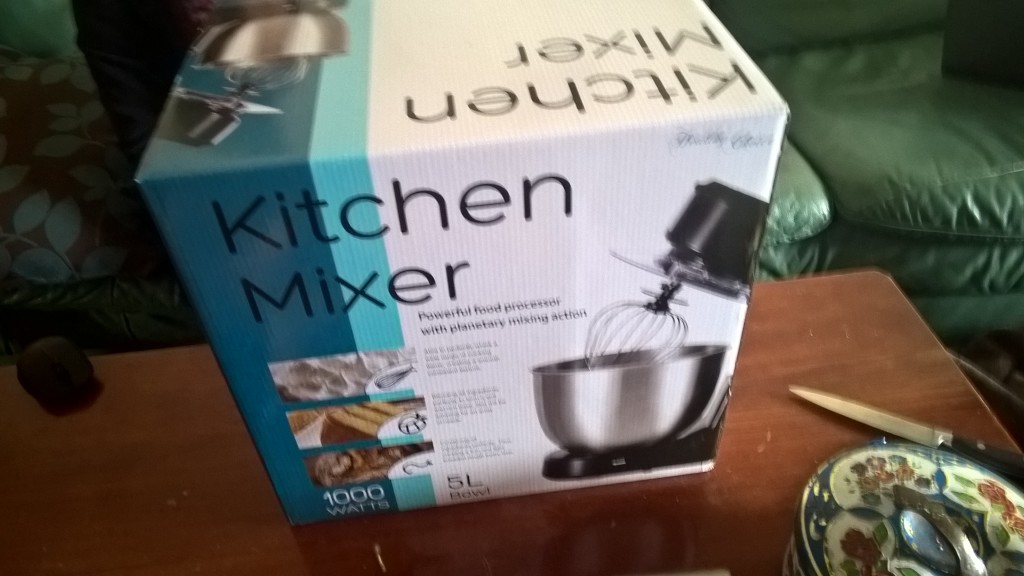 The machine inside the retail box was well packaged, with moulded styrofoam, and silky plastic baggies on all accessories, cords etc to prevent scratching, so it easily survived it’s probable role as the ball in the aussie post and woolworths distribution centre football match it probably went though on the way to its destination.

Visually and aesthetically, it’s a handsome machine, especially considering the bargain sub-$150 pricetag, and that we used one of ebay’s regular 20% off discount codes when using paypal. 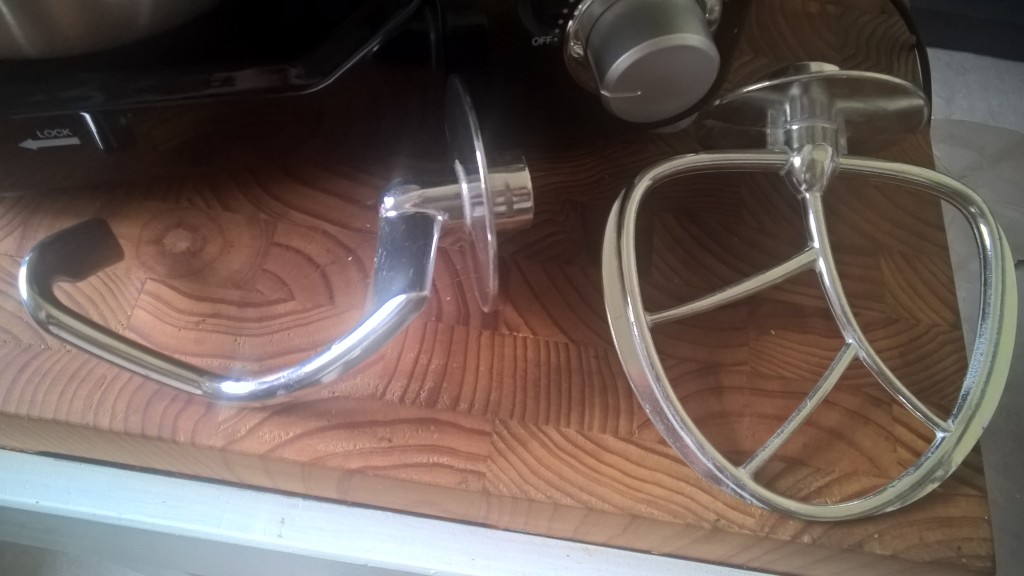 Build quality is not half bad for the price, with thick cast alloy attachment accessories (pictured above), a stainless bowl of a decent gauge which is not flimsy, and a pretty solid and high quality feeling “business end” on the planetary mixing action (see image below), and thoughtful design additions like VERY VERY sensitive and sticky suction cup feet, which, to my amazement, somehow even managed to develop a death like grip on the lightly oiled chopping board I initially perched it on for inspection. 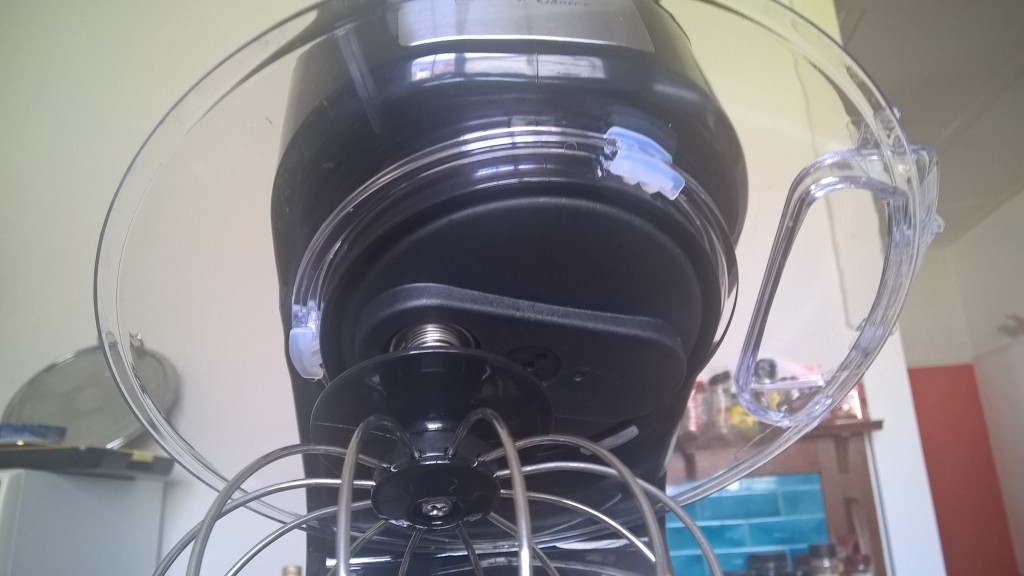 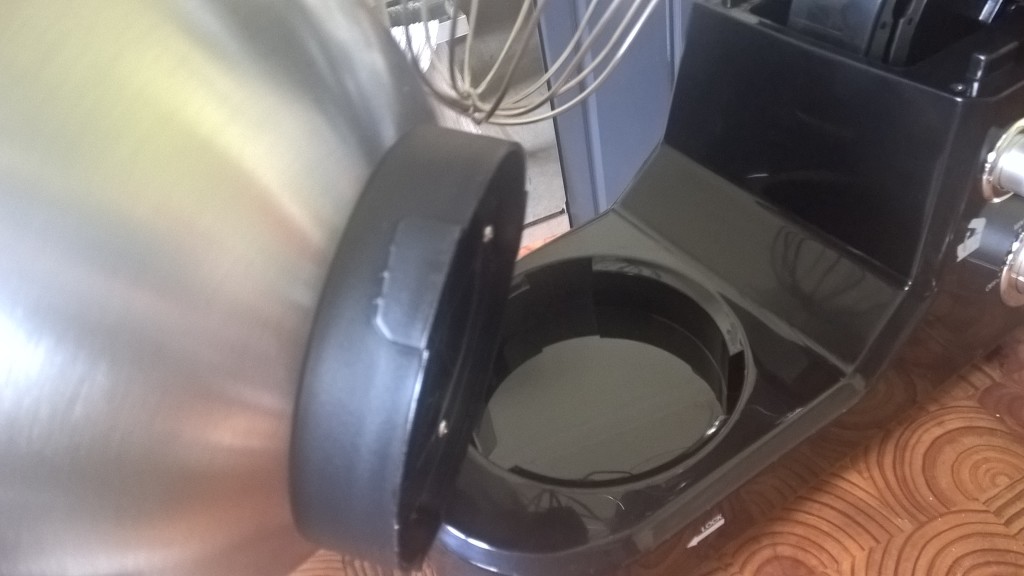 My only criticisms are fairly minor, in that the outer case of the machine itself and it’s controls aren’t of particularly heavy weight plastic-all the quality engineering and manufacturing budget for the machine clearly went into the essential working parts.

I’d say if it fell off the bench, or you were a bit rough with the controls there’s no doubt that it would end up cracked or broken- it’s not built for an abusive environment.

That said, most people look after their appliances, and it has those amazing sticky feet I mentioned earlier which would prevent any inadvertent kitchen kamikaze antics from this device- there’s no way it can “walk” and buck off the bench while unattended.

The control dial indicates four key speeds of operation- off, MIN, MID, and MAX, with about 10 apparent graduations in between, creating a theoretical 40 speed mixer.

In practice however, the mixer has about SIX main speeds, and the dial is digital, not analog in nature- What does this mean in english though? i.e. the position of the dial dictates a “target” speed for the machine- unlike on old sunbeam units like your grandma probably still uses, where moving the dial INSTANTLY feeds extra power immediately to the motor, or brakes the motor immediately, the digital controls on this machine are a fair bit more indirect- there are probably some fancy electronics in there which protects and STOPS the motor from being overloaded, or braking too sharply, causing damage to the motor and drivetrain- a very good thing!

What this ultimately means though is that this machine should last longer because the way the chef dials the controls abruptly simply cannot cause damage to the machine- it protects itself from abuse.

For example, smashing the dial up to MAX, from stationary, with the dough hook wodged in some very thick cake batter, will result in the machine Sloooowly working up to maximum speed at a rate that isn’t bad for the motor- the inbuilt intelligence in the unit also makes the mixer less prone to stalling when working hard, overspeed, or overheating.

Upon turning the machine over, a clearly legible, silver sticker on the base shows an RCM mark, which should be a clear indication that the machine has been professionally tested at an accredited test lab, and paperwork relating to the safety of the machine has been compiled- the mixer is clearly NOT a dodgy grey import, of questionable quality that is likely to kill you through electrocution, or burn your house down.

The RCM mark, and the fact that the machine was imported by a reputable electronics company, Lenoxx, which has been around for a long time gives the consumer a great deal of confidence that this is a quality and safe product, whose manufacturer warranty is likely to be honored if there is a problem. 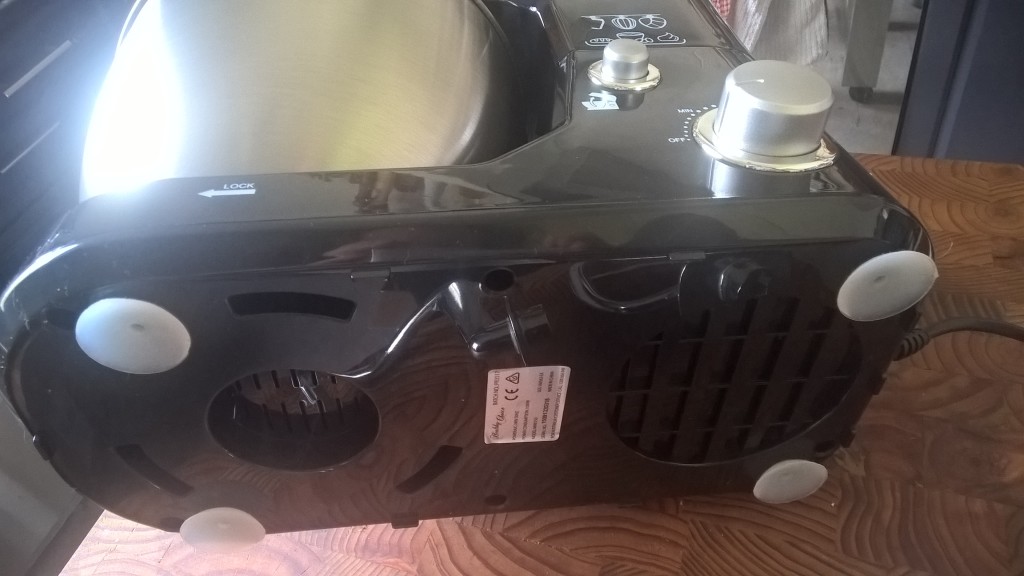