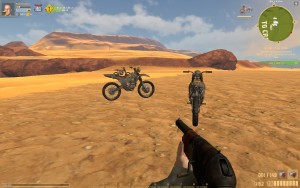 People should know better than to leave their motorbikes laying around unattended in the wasteland..

My character wandered around the Lighthouse world today, and polished off a few “Super Scarabs” and “Queen Glow Scarabs” with the trusty old automatic “Captain” heavy automatic weapon.

Anyhow, I encountered a staging area near the Car Valet, where a number of other characters had summoned
their vehicles… and not bothered to ride them… they had just wandered off and killed a few scarabs I suppose.

First, I tried to get my character to procure one of the unattended vehicles by using the “E” or use key. 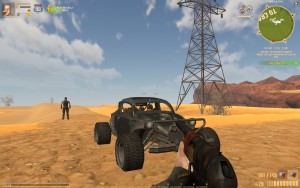 People, put your $3m V-dub sand buggy back in the damn garage! There’s nasty people in the wasteland..

Unfortunately, you can’t nick or borrow another characters bike, pig or car.. maybe that ability will be developed later in the game.

One thing I was surprised about though, was that after hacking away at an abandoned bike with a machete weapon, the bike unexpectedly blew up.. .this was in a supposed “safe zone” where you can’t damage other characters. This godmode setting obviously does not apply to character vehicles though! A Very odd Quirk! 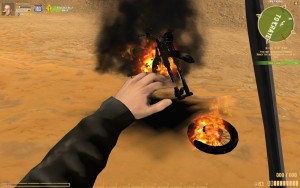 Mwahahaha! no more dirt bike for the wasteland bogans! it only took 4 or 5 hacks with the machete to destroy this bike!

Somebody unknown then killed my pig stone dead before I could even hop on it, presumably in retaliation. The poor thing, when “destroyed” changed form into a pathetic pile of bacon, curled in a foetal position.

The pig is pretty immortal though- pay 500 coins to the garage valet, and they will fix the pig up, good as new. All i can presume is that this petrol guzzling, brute of a trained mutant swine is actually either a cyborg creature, or it’s a member of the undead race?

The catch was that it was not available for 3600 Seconds after total destruction though. Presumably the same applies for the unattended bikes I merrily destroyed that day too.

Anyway, in Skies, if somebody is causing you grief, particularly around the “capture the flag” zones, and you know they have a car, bike or pig that they use to maintain control of the flags, camping out at a valet station, and smashing their vehicle while the rest of your party captures the flags. 🙂

As per my post on the Steam forums, I’ve had a few issues with the new pi 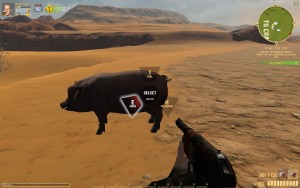 I just shelled 50,000 skies coins to buy a pig from the Kimary valet.
in exchange, you get a “key” to a pig put in your inventory.
To get the pig to appear in the valet’s garage, and be activated you have to “use” the key that is in your inventory i

For some reason though, the pig came in broken condition, though it was a “brand new piggy” – had to repair it first before i could summon it at the valet, which costs 500 skies coins a pop. 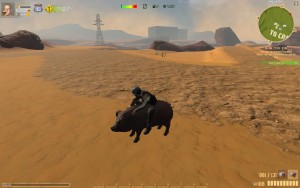 So far, i have encountered an annoying bug in Kimary, The “summoning” doesn’t seem to do anything. Where is the pig i purchased?
A glowy electrical storm thing appears in my map as a target to get to nearby, but there is no piggy to jump onto.

In the lighthouse world, it is a very different story- the pig appears a short jog away, and on your map, the location of your vehicle shows up as a bike kind of symbol.

Riding it around enemies, the pig gets damaged, but my character does not die! (WTF??)

Also, for some reason, the pig needs to be fueled up with…. gasoline.

This does not make a lot of sense, surely pizza or grain would be more logical?

But anyway, I feed my pig with gasoline, and it somehow doesn’t die.

Only shame is that the piggy is more of a novelty, and a way of getting past enemies without dying instantly, because i suspect my character actually runs faster than this big, fat, slow pig! 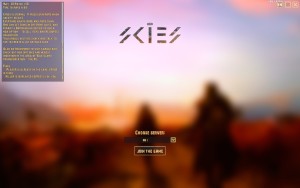 I Saw the early Alpha Release of The Skies appear on Steam about a month ago, and have been playing a few hours a week ever since I signed up.

Get “The Skies” on STEAM

My character is ROASTEDGOAT. If you are a player too, you may have seen me wandering around the Kimary, Crater and Lighthouse worlds over the past few weeks. 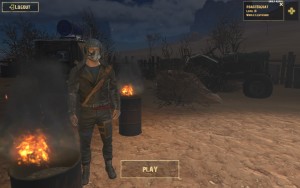 What attracted me to play the Skies is for starters, it was FREE to play if you choose not to pay to win (P2W) and purchase all the micro transaction upgrades and freemium items.

The game itself is styled as some sort of a mutated version of Fallout 3, with quite a few nice differences.

The fact that the game is in alpha mode, is both a blessing and a joy- while there are *PLENTY* of irritating bugs, it is nice to see the game evolve, and become more polished as time has gone on.

So far, i have managed to grind my character up to LEVEL 10.

That, has taken quite some time and annoyance.

I made a major basic mistake when I started the game- I didn’t upgrade the statpoints of my character’s Intelligence or technology abilities. (see screenshot below)

Because the game was pretty new back then (only days old) there just was not that many easy to find tutorials on how to start your build. maybe I should just junk this character and start again, but that would just be me having a tantrum and being a bad sport to my mind.

Anyway, the stat points are pretty important, and you have to think about how best to distribute them.

I’ll do a full article on the skies character statpoint matrix eventually, but i’ll just cover the basic flaw in my own build first in this piece.

Upgrading your character intelligence improves a number of things relating to: