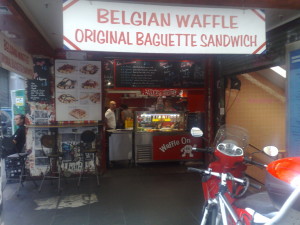 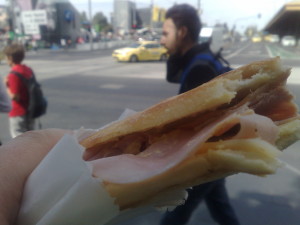 Most days when I’m in melbourne on a lunchbreak, and feeling hungry for a simple, tasty and 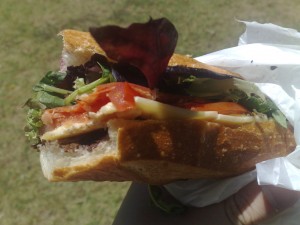 satisfying lunch on a budget, i head down to the Degraves street alleyway, where all manner of small laneway cafes and lunch haunts are hollering for my business with some pretty tasty deals.

The alleyway proffers all manner of lunchable treats and cramped, yet cozy cafe experiences, but I’m there for the budget lunch of choice for Melbournians- the classic, cheap baguette.
There are a few places that do good baguettes for a fiver or under;
1) The place at the end of the alley, to the right of the the grotty little grafitti covered stoop where musicians and buskers tend to loiter and serenade the lunchtime crowd. As far as i can tell, it has no disce 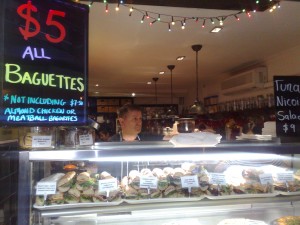 rnible name, but you can regognise it from its big colourful sign that SCREAMS $5 Baguettes!!

The rolls are smaller than some of the other places but the quality is a bit of a notch above the rest. I like the brie, ham and caramelised onion with salad. $5. (see pic above)

2) Inarush Expresso- This one is halfway down, again on the left hand side. As well as quite good soups and salads, which are the prominent, and nicer offering at this place, They do a few different types of cheapie baguettes, and again, they are a bit smaller than some of the other places in the alley. The meatball one is ok, but the toasted chicken snitzel with cheese panini for $5 is the goods.
The salads they do are well prices, and the theres quite a variety of soups in large, tempting looking steaming tureens out the front. You can sit down at the table round the back too, which is nice. I think they donate some of their profits to charities for the homeless, which is nice.

3) Now the BEST place- BB cafe- they boast TWO shopfronts- one on either side of the alley. A teeny $4.50 for a so called “petite” baguette, and $6.50 for a “grande” baguette. Now, the petite is pretty massive, and the grande is just a plain MONSTER.
Favourite varieties are the chicken, mayo and sweetcorn, the eggplant snitzel, and the classic chicken snitzel. All come with salad, cheese and a tasty mayo in them. the buns are consistently nice and fresh and soft, with the right amount of crunch.
These are GOOD. and worth a fair bit more than the almost mid 1990’s prices of yesteryear they seem to be charging.
Good food, and good value.