Doughboys Doughnuts have a very special place in my heart and soul, and contributed considerably to my falling in love with our beautiful city, melbourne. 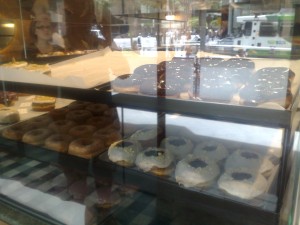 My first authentic doughboys experience was courtesy of my wonderful first flatmate on the auspicious day we were undertaking the painful, time consuming and annoying activity of moving house.

I’d been in East Malvern for a grand total of four weeks at that point, living in a happy and fun, but ramshackle slightly lopsided cottage which was the epitome of the stereotype of the worst house in the best of streets, surrounded by the grandeur of looming mansions, hidden behind the green filtered light of ancient and benevolent tre 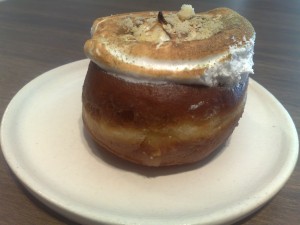 But the lease had come to an end, and the head tenant had decided not to renew, so we were out on our ears. Moving, packing, panicking, desperately looking for a new place to live.. Such is the grind and stress that is synonymous with being a scummy, landless tenant.

We had just picked up a big, unwieldy, but manly and powerful diesel Hilux flat tray for the job from the Ute rental place nearby, and the prospect of driving in melbourne traffic must have already made me look frazzled and in need of a hug..  My flatmate demanded we go get a big yeasty, crispy, soft, sugary hug, with creamy lime filling (aka, a key lime pie doughnut) from across the road at doughboys.

Back then, Doughboys, as I knew it, was just a wooden counter in the corner of Fancy Hanks BBQ restaurant near vic markets, not far from my work,  But I could never seem to get there in time before they sold out. 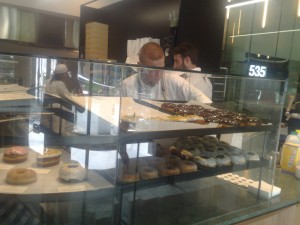 ile, Doughboys seemed to be taunting and tempting me (and everyone else in melbourne) with their hateful “Doughboys Coming Soon” sign printed on the glass balcony in front of 535 Bourke street since March 2015. When was soon? they had been promising SOON for months, maybe a YEAR. unacceptably cruel!

But in December… they finally stopped teasing and finally gave up the goods. They opened! Praise melbourne!!

… And i was reunited with my one true love, the Key Lime Pie filled doughnut. mmmmmm!!!

The new shop was filled with excited doughnut sugary goodness fans such as me, queuing up to get a well earnt fix after toiling the morning behind desks, in front of courts, and smiling at customers. 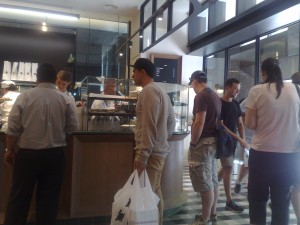 There were even a couple other fellow food bloggers, snapping away with fancy zooming SLR’s as the doughnut artisans, looking very smart and industrious in their white uniforms made delicious creations right before our eyes on the counters before us, as we watched though the glass and perspex dividers.

The new shop, doughboys first looks slick, stylish clean, and, I think the best word to use, is inclusive. The fact we can see the doughnuts bei 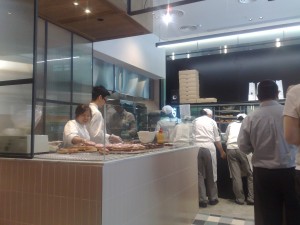 ng made by the chefs there and then, with the kitchen sort of integrated into the serving and coffee making area was a fantastic stroke of brilliance, connecting the customer deeply to the product.

They served two things, specialty Doughnuts of various types made with all organic ingredients, and coffee. Both of which they do very, very well. Options of both take away, and dine in are available. Take aways come in a stiff cardboard box to protect the soft iced creations from the jostling of the melbourne CBD foottraffic on the way back to the office to share with favourite workmate, or on trains and trams, smuggled home to loved ones.

If eating in, there are a few places to sit, but not many- and the doughnuts an coffee are served in bespoke, funky, locally made crockery, apparently specially made for doughboys. The coffee, I am yet to try. 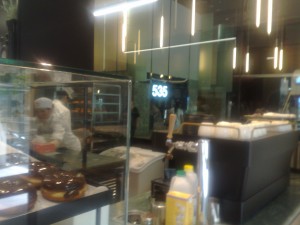 Other reviews are as positive and enthusiastic about Doughboys as I am- It really is one of Melbourne’s favourite food entrepreneur sons, and it is great to see how the time, preparation, thought and care that was clearly put into this first flagship standalone store has paid off with a really iconic and well executed launch.

For the peckish and curious, there are many, many more photos of doughboys delicious donuts in bourke street on google:

Lentil as anything is a restaurant with a twist, and a community bent that is pretty unique. Their motto is “food, culture, community” and as soon as you walk in, you can feel that positive vibe all the way!

Here, you “pay as you feel” – all meals, and coffee are paid for on a donation basis. The food is not free, by any means, but t 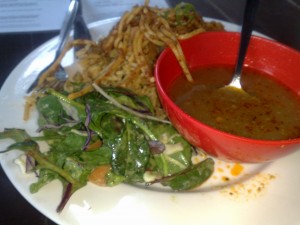 his system does allow people from all sorts of social demographics and situations to sit down in the same restaurant, and eat as equals. Maybe even have a chat if at one of the big communal tables!

A recommended donation of $15-$25 for a meal applies, and there is a billboard which gives you some guidance.

One cool thing is that “lentils”, as it is affectionately known, is a tax deductible entity, and you can obtain a receipt if you choose to donate to them online on their website.

If you are feeling generous today, make a donation now, and drop in to check the place out sometime.

The restaurant is a true social enterprise, where all the profits, if there are any that month get plowed back into training and helping people who need a leg up in the employment market, and maintaining the restaurnats as a safe and inclusive place that people of all walks of life might like to visit, even if they cannot normally afford to go to a restaurant.

If you want, you can even volunteer to help out with the front of house, or kitchen handing. Both are quite fun, where full, ad hoc training is provided, and you can get a chance to learn how a real commercial restaurant actually operates.

The meals are predominantly vegetarian, and in some branches of the restaurant, like in preston, the food is full and strict vegan. There are six restaurants Australia wide- with five in the melbourne area- Preston, Thornbury, St Kilda, Footscray, Sydney, and, of course, Abbotsford.

Lunch and dinner most nights is on a bain maree- all you can eat buffet style format, while Friday nights are an a’la’carte format.

Plated, cooked to order breakfasts are also served from 9am to 11am most days in Abbotsford. And, my, they are amazing breakfasts!

The farmers dosa is my particular favourite, as are the spicy pancakes. The home brewed swiss style bircher muesli is also a treat to behold. Lentils soundly puts most overpriced and overrated cafes to shame with their simple, delicious and inexpensive breakfasts.

The coffee is typically excellent, and also covers a range of unusual mochas, chai lattes, and everything in between. make sure you try the “dirty happy hippy” if you happen to drop in!

Sadly, the future of Lentils in Abbotsford is under threat at present, with a competitive tender process for the lease being put in place, where “hospitality focused” proponents are invited to take up tenancy. Lentils was not formally invited to participate in the tender process, and indications from the board of the Abbotsford convent foundation (ACF) has refused to engage directly with lentils, and has expressed that despite the 11 year long relationship, and being a founding tenant, Lentils will be offered no special treatment.

In 2011 a similar process was attempted, but community backlash and a roar of support from its customers saw the ACF back down and preserve lentil’s keystone position in the convent, which attracts over one million visitors annually.