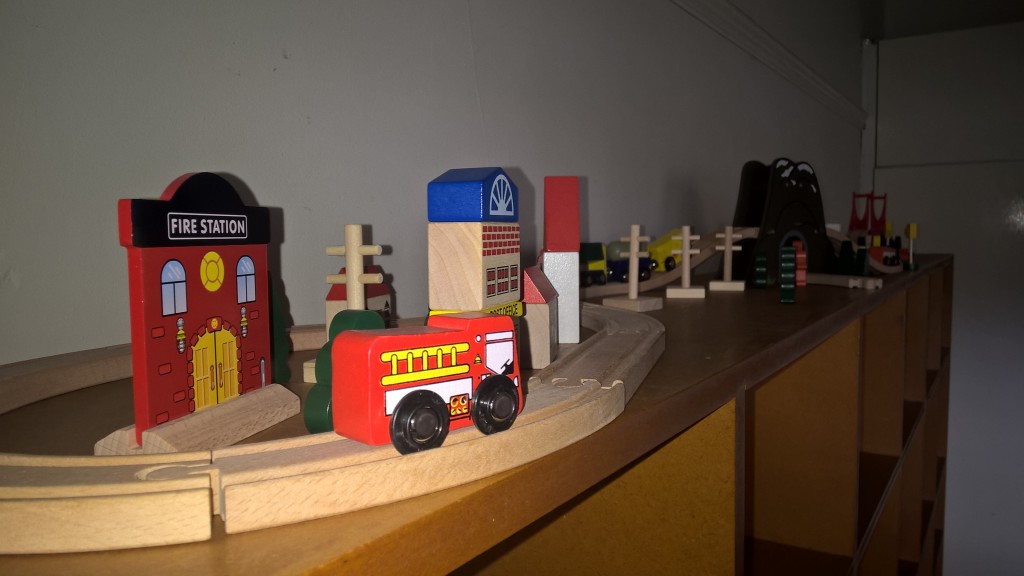 Wooden train sets are a classic children’s toy that generations of kids have been playing with probably since the start of the industrial revolution when the train first appeared.

Most of us have have great memories of a wood train set- the smooth wood, satisfying weight, colourful accessories and fun times with friends and family members, either at home as owners, or at school or playgroup. (Possibly with jealousy mixed in if it was at the kid next doors!)

They are durable, timeless  and for some reason capture the imagination of girls and boys almost alike (And are probably the cause of many scraps between siblings in the playroom over who gets to play first)

They cop a beating- a teacher friend said the set in her class toybox was worn, overloved but as old as the school she worked in- over 30 years!

Unfortunately, for some strange reason, these wooden train set toys often do not get handed down from parent to son, or daughter.

They are big, bulky, heavy and rarely survive a house move or spring declutter and garage sale.. either that, or being the prized toybox asset they are, got given away to some odious snotty nosed younger cousin whose favourite words were “I want it NOW” by your mum or dad many moons ago just to get them and your aunt out of your house with minimal tantrums and kick marks on the newly painted walls one weekend.

Anyway, since our family train set was long gone, we were on a mission to buy a new one… for our kid… I swear.. (Ok, I freely admit I enjoyed playing with this thing way more than an adult should ever speak about!) 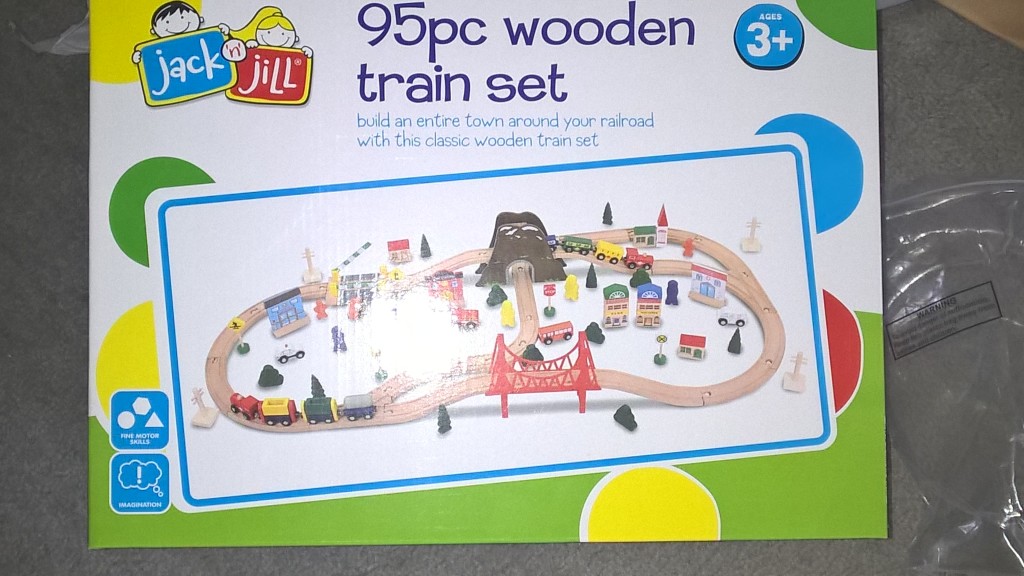 This Jack N Jill 95 piece beechwood train set on ebay was pretty reasonably priced, and not too small, not too big.

(no kid wants an embarrassingly small train set.. or adult either.. you do want to play with it too, right?..so we bought two 🙂

Looking at the box, I was rather surprised at how small the package was… was there really that much stuff in there?

It had a fairly hefty weight of a few kilos about it though.. 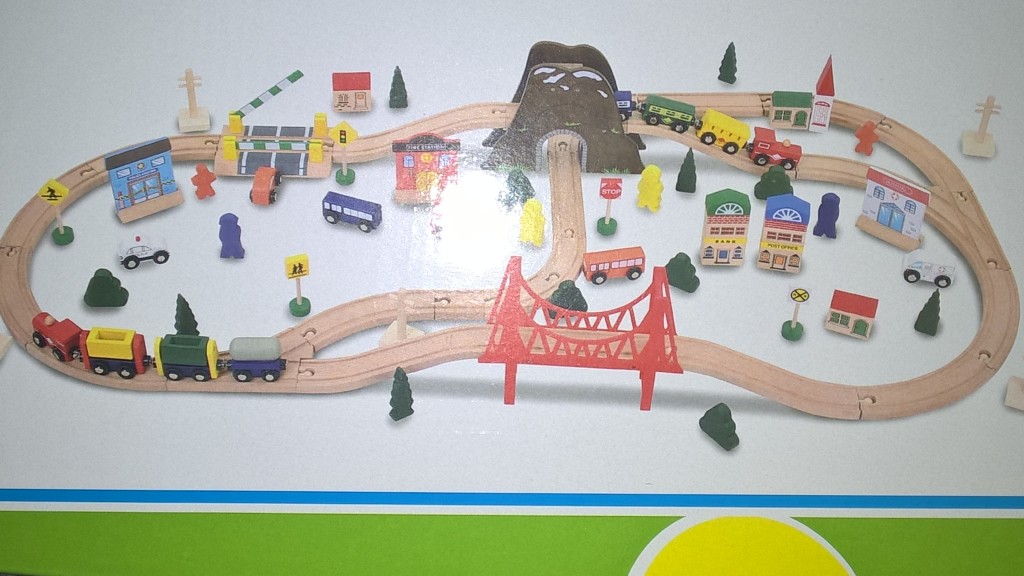 Upon opening it up though, literally every crevice of that little box was stuffed choccers with track, accessories and vehicles, all carefully individually wrapped in tissue paper and placed in logical groups in sealed bags.

The bridges and mountains required some minor assembly- a couple screws to hold them together and onto specialised pieces of track.

Just don’t expect to get them all back in the box… its literally impossible!

Anyway, now the box was open, and the pieces were out, I decided to “test” the set and build it up.

Basically because we didn’t have space on the top of the low bookshelf we have in the playroom to do the standard suggested layout that is printed on the box, I decided to do my own track design.. and was very pleasantly surprised that when all the pieces were arranged carefully, the track extended more than 2.6 metres, including a substantial loop-back and turning circle at the end, so the total usable track length is probably approaching a whopping 4 metres!

The big picture below was taken from the “golden gate” style bridge approaching the far right of the “playspace”.

The first pic in this article was taken from the other side, looking from the turning circle, over the mountain tunnel module, back towards the golden gate in the distance.

Anyway, its a great quality set, and I had heaps of fun with it, so our child certainly will this Christmas with the double set!!! Very highly recommended!

Last note is compatibility with other similar sets (or grandpas!)

From reading elsewhere, the tracks and trains are standard sized, and should be more or less compatible with Brio, Thomas the tank, IKEA and Imaginarium sets. 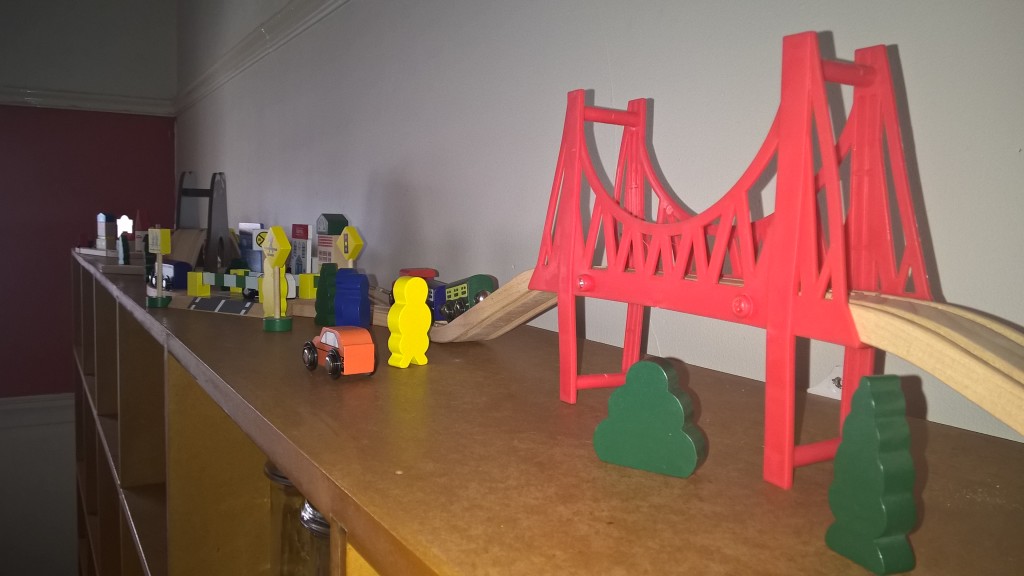