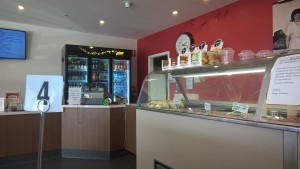 ed into burger brothers & chookas charcoal chicken at Howitt street wendouree for a quick, and hopefully good value lunchtime feed.  The food I ordered was competent, fresh, and tasty enough, but I wasn’t blown away- for the price I expected a bit more- Sadly, the “big brother” burger turned out to be more like a bland accountant or conservative public servant type, not a bad boy that plays in a band, rides motorbikes, and hoons about in his terminally unregistered commodore, outrunning police on a regular basis.

The shop is a tidy looking place, but to be honest, the decor needs some creative flair- with a bit of effort, it could be made to look a bot more interesting than what appears to be a bog standard retail shop with a few counters, tables and a kitchen plonked in round the back- sadly, its got a a bit of a sterile, generic a 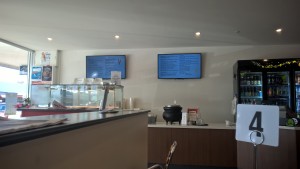 The owners & staff appear to be Mediterranean, probably Greek, with what looks like multiple generations of the family working the counters and kitchens, and milling in and out of the shop at various points. A few more family photos of years gone by and other more personal touches would go a long way in brightening the place up and  giving it some soul. – You see that sort of thing in ethnic foodshops almost universally around Australia, and it gives a homely air to the establishment. 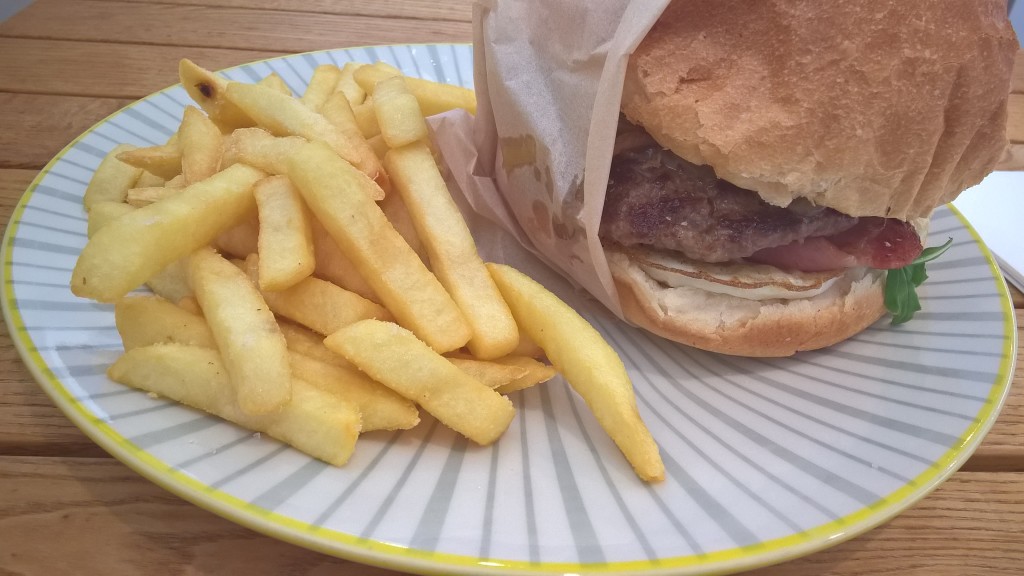 The “big brother” burger I ordered came out quickly, was tasty, with a nice big bun, and decent salad, fresh tomato… perfect bacon & egg… overall a very competent burger, but it wasn’t mindblowingly awesome, or unique in any real way.- for the price of $11, plus extra for the chips, I kind of expected a bit more than boring. Maybe some special sauce to zing it up a bit at least? 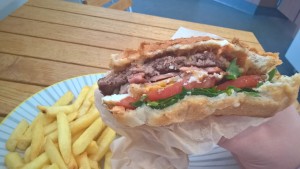 The big let down was the fact that the meat pattie was bland as cardboard- typical Aussie or maccas american style, when at other Greek shops, they usually do something interesting with it, adding spices, bacon, onions or other vegetables to make it juicier and more interesting, similar to my own burger recipe , which I unashamedly nicked the core of from Nshry in port melbourne.

Possibly my fault for choosing the menu item at the very top, but I did expect that it would be a flagship burger that would have some sort of wow factor.

Other favourite places in town, such as I lover burgers & kebabs and round the way really have the formula down pat- instant MMMMM! factor, and they both offer something a bit uniquely different.

Burger Brothers & chooks’s charcoal chicken also stocks famous Triano’s Gelato- I’m yet to give it a go, but it certainly looks pretty good! The charcoal chicken offering or other burgers on the menu may also be worth a raz. 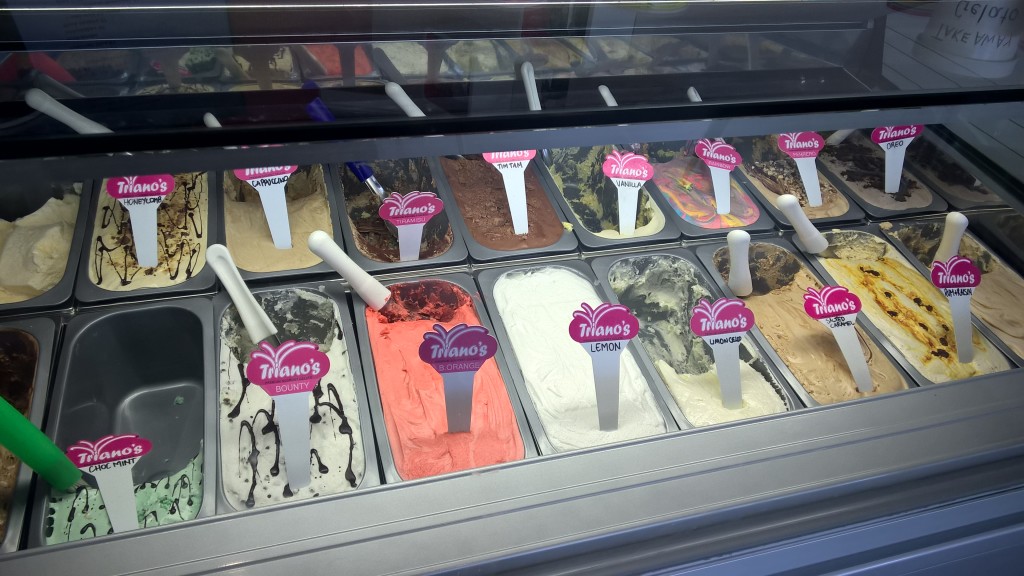 Lake Wendouree in the centre of ballarat supports a plethora of beautiful and important avian life, great for an every child wins a prize sort of bird watching experience, as there is always plenty to see- as the lake rarely disappoints by beiing devoid of life. It’s always rather the exact opposite- full of life, both creature, and human. (Obsessed joggers and bikers could possibly also be classed as strange creatures also)

Not half bad considering that lake wendouree is a man made lake, which is essentially filled with class A treated water. A.k.a treated sewage.

According to the city of ballarat council website, our favorite lake wendouree is essentially around ~25% genuine sewage pond. Nonetheless, we love it in all its recycled and slightly pongy glory, even though only rowers and 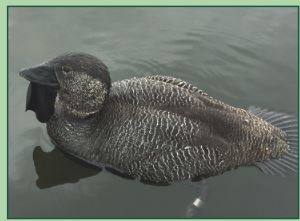 unsuspecting birds are the only ones who ware willing to brave swimming in it.  (no wonder the acquatic weed grows so fast!!!)

While walking and picnicking on the lakes banks this weekend, we encountered quite an unusual, and distinctly different duck.

Otter like, and greasy in appearance, with a distinctive flap of skin, or wattle beneath its bill, and a spiky, but muscly beaver like tail, was a short billed, banded duck.

I’m quite a fan of ducks in general, and I couldn’t decide if it was the most interesting looking duck i had ever seen.. or.. well.. the ugliest.

Watching it attempt to flop out of the water, and over the shallow lakebank, I don’t think I have ever seen a more awkward and ungainly duck than the musk duck.

It was absolutely and utterly useless on land, and pretty much tripped on its own feet, doing an almighty beakplant into the mud after two ungainly and wobbly steps. 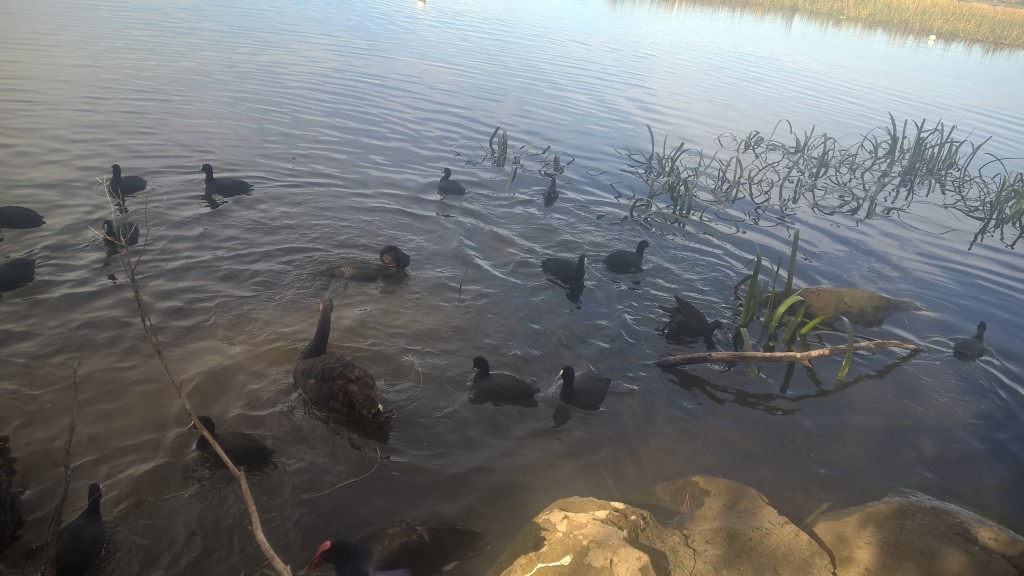 ducks can be quite aggressive, and are shunned by other lakelife.. i didn’t see any real evidence of this, as we followed it about, trying to figure out if it was a strange mutant, or a genuine rare breed.

It’s fat tail, and muscular body did suggest that the musk duck is a rather meaty and tasty bird however.. and we speculated how it would be served in a Chinese restaurant… the reality is its probably as tough as old boots though, like every he native bird that isn’t extinct yet.

Looking on Wikipedia, a few interesting facts about this odd looking and awkward bird are:

That it is an excellent diver and can submerge for 60+ seconds, but is absolutely hopeless on land, so will rarely exit the water (which we saw ample evidence of, both on land, and on the water, where it vanished with a slight ripple, and miraculaously popped up again 20-30 metres away a number of times.

Their name emanates from the fact that the musk duck absolutely reeks of a musky odour during breeding season and are promiscuous, are lone wolfish and antisocial outside of it, eat yabbies, small fish, and the eggs of other birds, and can live and breed for in excess of 20 years.

In confirmation of our thoughts on this duck’s culinary potential, wikipedia also reports that they are bad eating, and are not prized at all for their edibility.

The courier ran a story on the musk duck a couple months ago, describing the male musk duck as a “prowling” scary creature that was shunned by the rest of the bird community on the lake, as it is so aggressive it would even pick a fight with a black swan…. a bit of an exaggeration.

Ian Simsen also showcases some wonderful photos of the musk duck, like the one below on his blog, which is well worth checking out: 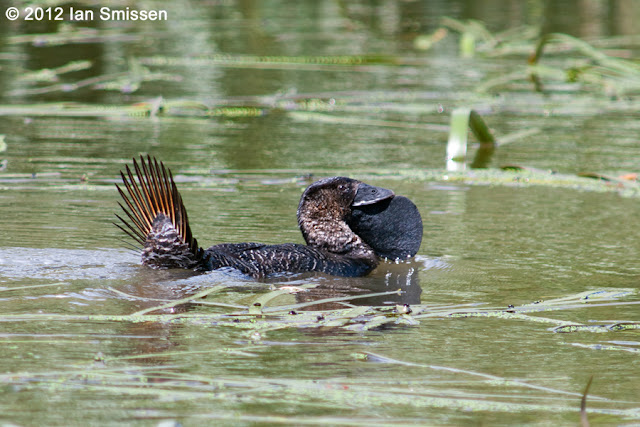 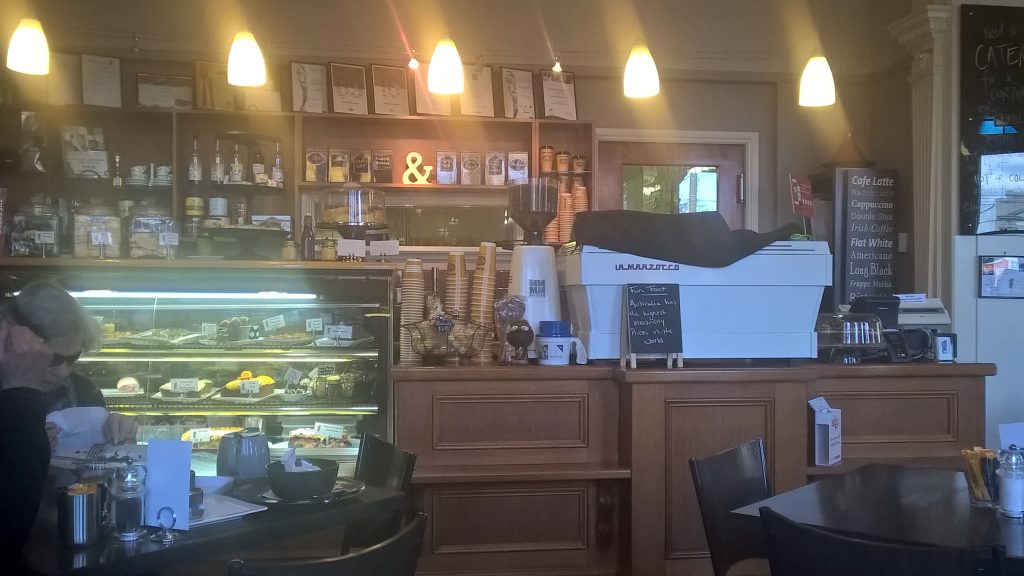 Dropped in for a coffee and cake at the Turret Cafe ballarat on Sturt street, just down from the base hospital.

As usual, there was a lot of activity, with people both staff and customers scurrying about everywhere, and nomming into delicious looking lunches.

The atmosphere in the cafe is absolutely beautiful, refurbished in a sympathetic style that highlights the history and charm of the building the turret his housed in – “linden”- upstairs is accommodation that can be booked out on air B&B under the name No.1 Errard boutique accommodation.

As we waited patiently for service, mouthwatering fragrances wafted from the sorely tempting looking lunch options as the waitresses rushed about, but sadly we just didn’t have time to stop long enough to enjoy the offerings properly.

The refrigerated cake cabinet was what we were here for though- numerous sumptuous and some rather unique treats, baked in house beckoned! 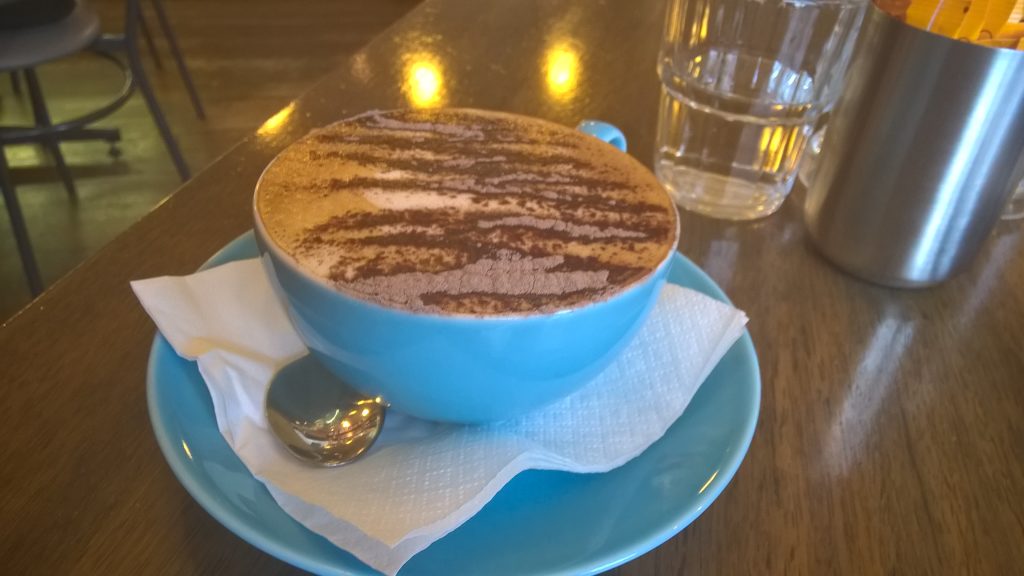 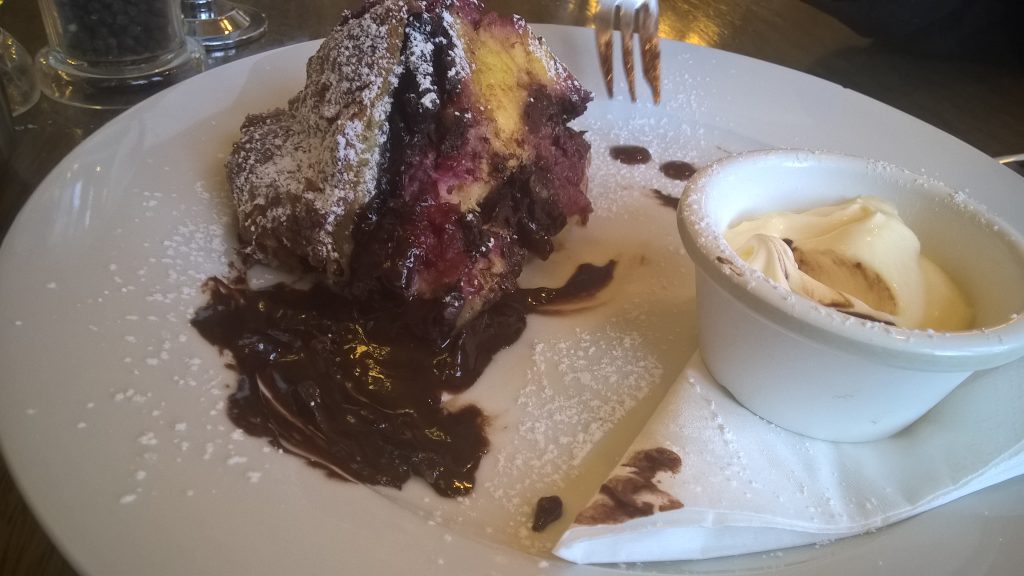 And that was what it was- literally.. but they failed to mention in the description the best part- the fact the Croissants were drowned decadently in dark chocolate fudge sauce, cocoa and the layers of raspberries were interlaced with huge chunks of high quality chocolate. Its quite a creation worth experiencing, and it truly is an absolutely exceptional triumph for the patisserie staff behind the scenes.

Coffee was great too, staff are wonderful. Needless to say, we plan to come back, and try out those meals as soon as possible too. 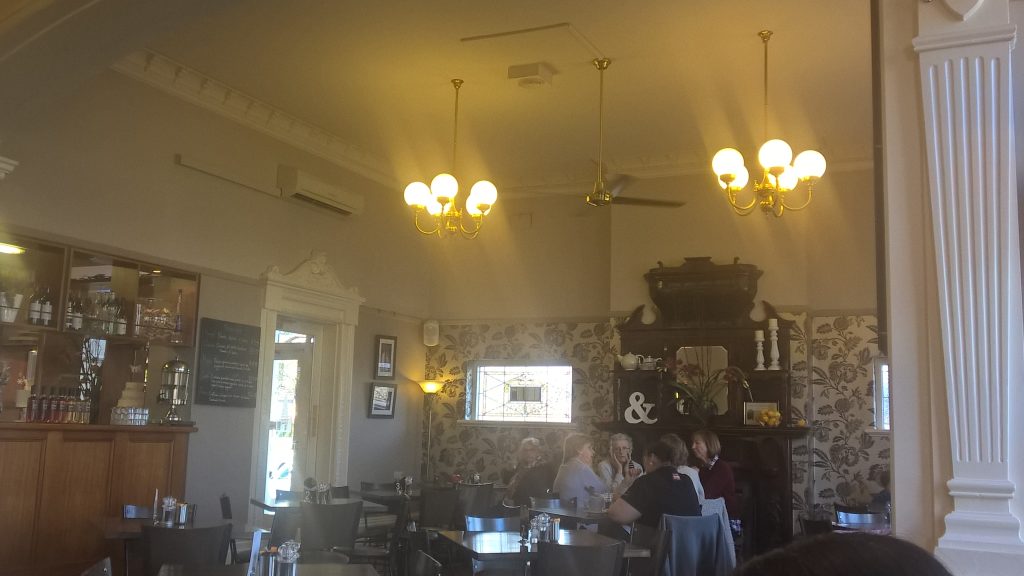